I have a 15 year old brother. When we were growing up I would tell him stories about girls and he would listen on impressed, but nowadays he’ll be the one telling me all the stories about girls and I’ll be the one impressed. The change happened around the time he told me he wanted to be the “Nick” of his school. He was known as the “manwhore” of his year weeks later. So anyway he got back from America yesterday. I picked him up from the Airport and took him to a café we both like then we sat in the park opposite. We were hanging out etc then he told me that a girl that was sitting at another café near the park had been checking me out the whole time.

I figured I should try look cool in front of him or whatever, so I told him to meet me round the back of the café, and walked over to this girl with a business card in hand. Anyway I got to her table, and said hello. I explained that my little brother was under the impression she had been checking me out. She immediately gave this expression that said “What the FUCK are you talking about” better than words ever could. Her sheer confusion was enough to completely crush any hope I had about the situation (Which was minimal at best) so I wrapped it up it by giving her my business card and telling her she should call me if that was the case, and if not that I hope she has a lovely breakfast anyway.

In hindsight that probably wasn’t the smoothest line to end that whole escapade on. I then went round the back of the café and explained the situation to my little brother who was stoked that I had the balls to do it in the first place. His enthusiasm about it made the whole thing worth it anyway. She’s yet to call. I guess I’ll never find out if her breakfast was lovely or not after all. 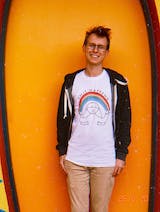